Navi Mumbai is close to Mumbai. The Maharashtra Government industrial promotion policy leads to development of industrial belt in Navi Mumbai. These industries in turn attracted a large population of workers.

Also, the cost of real estate and housing in Navi Mumbai is much less than costs in Mumbai and sub-urban areas. Owing to this, many government and corporate offices have shifted from Mumbai to Navi Mumbai. Industrial belt of Taloja-Thane-Belapur in Navi Mumbai offers job opportunities of every conceivable kind - from engineers to mechanics to clerks to peons, in multiple industries like Chemical, Pharmaceutical, Electronics, Engineering, Textile Processing, Oil Processing, Paper, Plastic, Steel and Food. As a result a large population of service class and middle class population now resides at Navi Mumbai.

To improve the visual aesthetics of the public infrastructure like development of gardens, rejuvenation of lakes, holding ponds, traffic islands lakes Restoration & Conservation. Twenty two Lakes have since been covered under the same

The City is a part of North Konkan region and is situated between Parsik Hill mountain range which has an elevation of 45.00 MRL in the east and Thane creek on the West where the average Ground level is 2.00 MRL. The entire nodes or townships developed by CIDCO and the old village or Gaothans are built on reclaimed land. The high tide level with respect to mean sea level in Konkan region is 4.5 meters. To avoid cost of reclamation, the formation level of city is kept below high tide level. This area receives very high rainfall of 3000mm approximately causing water logging due to high tide and land slide due to fast reseeding of mountain water.

The city is below high tide level due to which low lying areas are faced with its related problems. As a solution, department storm water management of Navi Mumbai has been planned on the lines of the Netherlands and is called the "Dutch Method". In Netherlands, mechanical gates are used which are operated by electric power in NMMC, automatic mechanical gate has been proposed. Its operation is based on water pressure during High-Tide and Low- Tide and does not require electrical power, making it Eco-friendly Operation Maintenance of System. 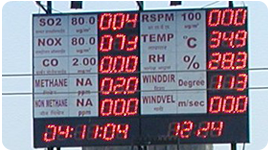 The decreasing trend in NOx and PM2.5 levels in NMMC could be attributed to the successful completion of concretization of 19 junctions within the city as well as the work of Sion- Panvel highway. Also adding to this is the regular cleaning by vacuum suction machines and plantations along the road side.